Why would you go out and buy this thing in 2022? Don’t you have enough consoles and computers as it is? Won’t this ugly beige box just collect dust in the corner once the novelty wears off? Can’t you just be normal for once?

All valid questions by an imaginary enraged significant-other, some of which actually do have answers if you ponder them long enough. 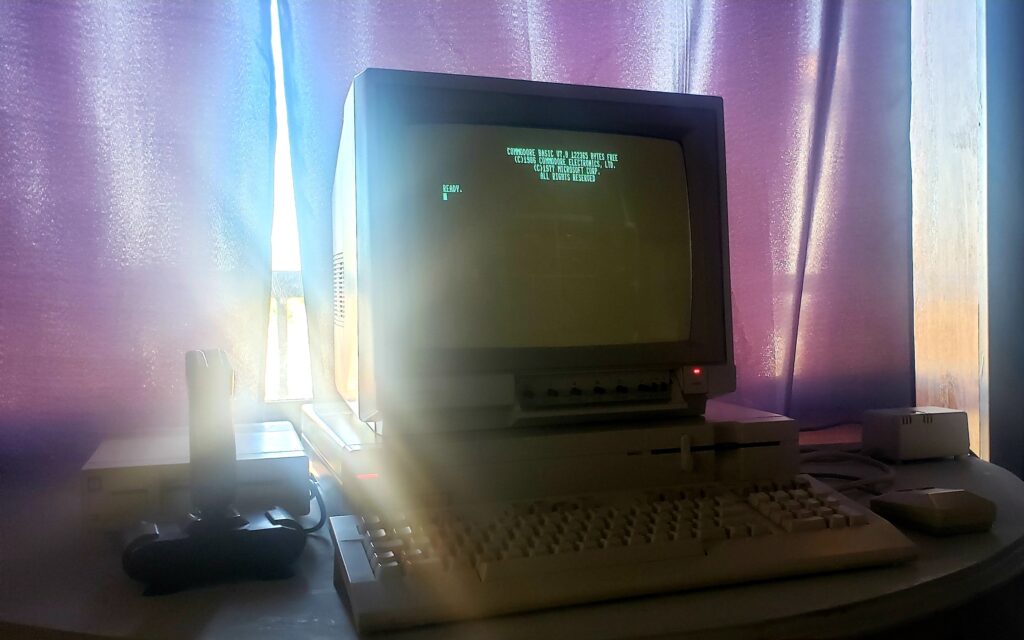 Allow myself to introduce myself. My name is Lanny and I’ve been a Commodore user since 1995, when my cousin gave me a second-hand Amiga 500 that I had mistakenly expected to be a flashy new IBM “Aptiva”. Despite my crushing disappointment after opening the brown cardboard box in which it was contained, I feel it worked out well in the long run, and I’ve been interested in Commodore computers ever since. Though I’ve owned a C64, 64C, PET 4032, Amiga 500, and (most recently) VIC-20 at various points in the 25 or 30 years since, I’ve never really dug deeply into their hardware/software ecosystem as much as I would have hoped. Games and applications weren’t easy to obtain in the early internet days, there were always other systems around to serve as a distraction, and my own attention span gave way to frustration around flaky 5 1/4″ disks that worked sometimes at best.

Doesn’t mean I can’t give it another go, I suppose.

A pristine Commodore 128D recently found its way into my cross-hairs and the moment was seized. I was lucky enough to have a 1902A monitor included in the package to provide valuable warmth in the winter. With all the entertainment potential of this new purchase in mind, I feverishly started running cables and assembling its parts into a cohesive whole.

It turns out that this isn’t actually that intuitive if you’re new to this whole game. I knew I had a DE-9 connector available for RGB, a DIN connector for composite video, as well as a set of RCA jacks to connect non-Commodore devices. My first efforts resulted in nothing but blank screens. About 10 minutes later, I realized that the joystick I had connected to the 128D caused the system to not boot properly in 80 column mode (speaking of non-intuitive moments..) and I was on my way in full high-resolution RGB glory.

But wait! It was actually high-resolution monochrome RGB glory. After turning on the monitor’s “green” monochrome filter and feeling pretty cool for another 10 or 15 minutes, I figured I had better troubleshoot further. I found that the screen would not display in color until I unplugged another game console that I had connected to the monitor’s RCA composite jacks. Even with RGB selected, that still caused trouble. That’s pretty bizarre, huh?

Other things that were not intuitive – I understood the concept of C64 mode, but I couldn’t figure out how to enable it. A bit of quick Googling told me that you have to hold the Commodore key on boot. Neat. Not like C128 users even use C64 mode that much anyway, right? Doesn’t that defeat the purpose of paying all this money for a newer, more capable machine?

I’m not actually ignorant about that one, just trolling.

Anyway, I figured that if I’m going to spend so much time and money on a machine that was obsolete by the time I was in kindergarten, I may as well compulsively document all that time wasted(?) so I’ll have something on which I can wistfully reflect once I’ve played enough licensed Ocean movie/TV/cartoons to induce a level of existential depression beyond any experienced by a human being in recorded history. 365 days of 128, 365 posts. If it’s a day where I can’t touch the computer itself, I’ll find some related not-so-technical topic and have at it. With any luck, we both might learn something.